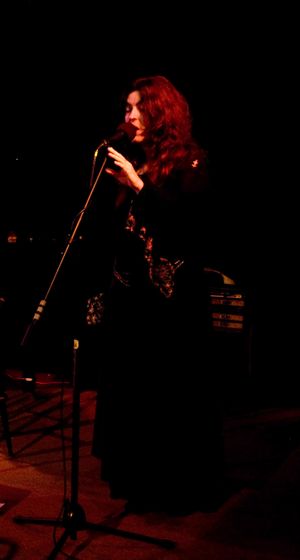 Julie’s rich, warm, passionate voice fills the room with luscious melodies and evocative lyrics in songs about life, love, peace and our precious planet whether in performance or on recordings.   A singer/songwriter based in Woodstock, NY, Julie Parisi Kirby has sung leads and harmonies with her husband, T.G. Vanini, in The Princes of Serendip for the last 24 years.  A versatile singer, Julie has sung in a variety of styles including folk, pop, traditional and Renaissance. An environmental and peace activist, Julie wants the songs she writes or chooses to sing to inspire and promote peace and caring for each other and the Earth.

Julie has recorded six albums with T.G. Vanini and The Princes of Serendip and has recorded background vocals for other artists.  She recently released her first solo album entitled In Her Dream which has been receiving national airplay.  In Her Dream has received much positive acclaim including this from Tom Pacheco, ". . . When I put it on my CD player, it seemed the room brightened and my sad spirits lifted.  In these strange, dark, times, its sheer humanity made me feel like the world was not as bad as it seemed . . . For Julie, both the past and the future coexist with the present and she writes seamlessly and beautifully about all three."

One of the most memorable moments of Julie’s career to date, was when she sang at the 90th birthday party of a peace activist where Pete & Toshi Seeger were in attendance.  She sang her song, Laughter of the Babe, with Pete & Toshi sitting directly in front of her.  Pete had this big, beautiful smile on his face and was singing along. After the performance, Toshi told her how much they enjoyed the song.  Julie is still over the moon to know that Pete & Toshi Seeger liked her song and her singing.

Although Julie was always aware of her ability and desire to sing, she struggled with shyness and lack of confidence.  She studied classical voice technique as a teenager which increased her technical skills but didn’t help with the shyness.  Julie was blessed to meet an extraordinary shamanic healer named Rosa to whom she is forever grateful.  During that time, Julie was also fortunate to meet Amy Fradon, a singer/songwriter and voice teacher who is also well-grounded in energy work.  The work that Julie did with both Rosa and Amy, gave her what she needed to be able to sing in public the way she could in her living room.

Julie has practiced a vocal improvisation technique that she calls soul-singing for over 20 years. Soul-singing is at the basis of her creative and spiritual practice.  She has lead soul-singing circles and teaches this technique privately as well.

In 2018, Julie was invited to join Amy Fradon in a series of fundraising house concerts that Amy calls “parties with a purpose” to raise money for democratic candidates.  They performed every week through the summer and fall of 2018 and raised over $20,000 that was distributed amongst various candidates.  They are currently working on new material and gearing up for the 2020 election cycle.  This very direct way of combining Julie’s love of singing with her activism is both greatly satisfying and heartening.  And, she gets to sing with a very dear friend in the process!